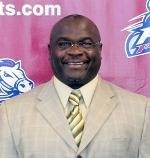 Ike Ofoje just wrapped up his 25th season at the helm of the USC Aiken men's soccer program.

Ofoje started the women’s program at USC Aiken in 1997 and served as its head coach for eight seasons, compiling a record of 51-77-10. He also coached the men's team during this time. In 2005, however, Sue Vodicka was hired as the program’s first full-time women’s soccer coach.

With the addition of Vodicka, Ofoje took on the role of Director of Soccer Operations.

Ofoje, a 1991 graduate of New Hampshire College, was a two-time NCAA Division II All-American and was named Most Valuable Player for his 1989 NCAA National Championship team.

As a player at New Hampshire College, Ofoje led his teams to a 72-15-4 record and four NCAA Tournament appearances. He totaled 58 goals, 36 assists, and 152 points in 75 career matches.

After graduation, Ofoje played professionally in the United Systems of Independent Soccer Leagues for the Boston Storm for two seasons.

Ofoje, who holds a USSF “A” coaching license, served as assistant women’s soccer coach at Illinois State University before arriving at USC Aiken.

Sam Okpodu (NSCAA Premier & UEFA B licenses): Sam was the former Head Men’s Soccer Coach at Newberry College, SC. He was the Executive Director SC Youth Soccer as well as the NSCAA coaching staff. As a player Sam was an All-American standout at NC State University, NC.

Eugene Eshun-Phillips (USSF C License): Eugene was a 4-year starter at USC Aiken and is a senior coach with GA-SC Bulls Soccer Club.

The rest of the 2015 coaching staff will consist of high school coaches and college players.